By: Amanda Garrity  for: GH

The Duke and Duchess of Cambridge’s love story is full of Hallmark moments that seem far from reality (our reality, at least). The arrival of their third baby, however, seemed out of the ordinary because IT. WAS. SO. NORMAL.

“If you were to quickly glance at the photos of them showing off their new baby boy, you wouldn’t know that they’re royal,” Patti Wood, body language expert and author of SNAP: Making the Most of First Impressions, Body Language, and Charisma told GoodHousekeeping.com. (Just ignore Kate’s sapphire sparkler, OK?) Despite the hype and attention, the couple acted as any new parents would — smiling, giddy, and totally smitten with one another.

But remember their first time around? Nearly five years ago, we witnessed a timid — yet ecstatic — couple hours after the birth of their first child.

“Kate’s feet are nearly overlapping as she’s standing on the stairs,” Patti Wood, body language expert and author of SNAP: Making the Most of First Impressions, Body Language, and Charisma told GoodHousekeeping.com. “This indicates that she feels the need to keep it all together. Both of them have relaxed hands but there’s slight gestures like the feet and forced smiles that indicate they’re a bit tense in this moment.”

With time — two years — the couple became more comfortable as parents and evidently, with the media attention. “This tender moment between Will and Kate is something out of a movie,” says Wood. “Her fingers are locked inside his, which is her subtle way of saying ‘this moment is all about us.'” When it came time for baby #3, the royal couple was ready for whatever came their way. “In every photo of the couple, they are completely present with one another,” says Wood. “This moment is 100% about the new addition to their family, and not the photographers, which is a pattern we see time and time again.”

It’s true: After a hectic day in the hospital (well, hours), the couple looks relaxed, calm, and honestly, a bit tired. “Even in a moment that’s uncomfortable, the pair instantly relaxes when they lock eyes,” Susan Constantine, human behavioral expert and author of The Complete Idiot’s Guide to Reading Body Language, told GoodHousekeeping.com.

This moment is similar to what we’ve seen following the birth of their previous children. “The couple is leaning toward one another,” says Constantine. “With her double arm hold, it’s almost as if Kate is presenting the baby to him — and Will’s taking it all in as he turns his toes and torso toward his wife.” 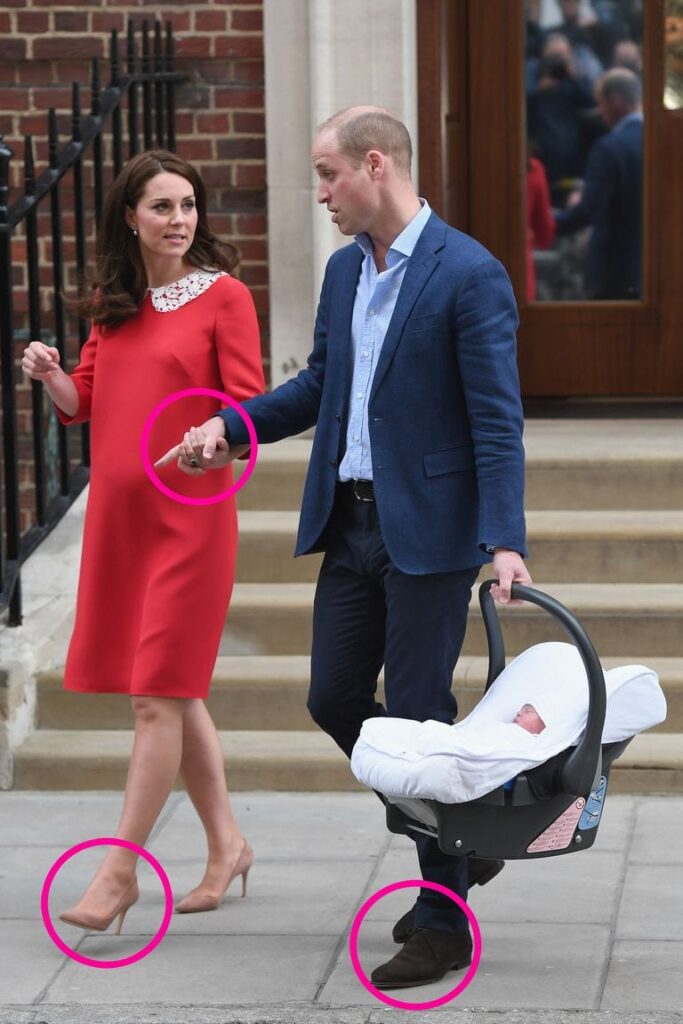 There was no awkward car seat hassle this time — third time’s the charm, eh? Constantine picked up on the couple’s unison as they walked over to the car. “Their left feet are married,” Constantine told us. “This is the type of behavior that you want to see in a couple, especially after they just had a baby. Not only are they in-sync but William also has raised brows and his hand on top of Kate’s, which insinuates that he’s trying to protect her.” Her guess is that he’s warning his wife — remember she’s wearing heels!— to look out for the edge of the sidewalk.

If there was one moment to cherish forever, it would be this one: Do you see it? The baby and Kate are practically twins. “They are naturally mirroring one another’s hand gestures,” says Constantine. “Sure, Kate is fixing her hair from the wind but it’s also an indicator of a strong rapport between the two.”

Our hearts can’t take it. Now we just have to wait for the first sighting of Prince George and Princess Charlotte with their newborn brother.